Problems with my access to the tubes of the internets prevented me from posting this piece last week. But it’s still good and still relevant, especially in the wake of last night’s presidential debate. The New York Times and the FiveThirtyEight forecast came together to create this interactive flow chart, if you will, of the ebb and flow of electoral politics.

Two different views, one based on electoral votes and the other on the margin of victory, determine the basic chart type. But both let you watch swings states vacillate between Republican and Democratic support. Context is provided to the side of the main graphic to explain just what was going on in particular elections.

Credit for the piece goes to Mike Bostock, Shan Carter, and Amanda Cox.

This graphic comes from a set by the New York Times that looks at absentee and mail-in ballots, which are particularly popular in western states. The representation of the absentee ballot from Minnesota in 2008 is then examined to see which areas were the reasons for discounted ballots.

Follow the directions to the best of your abilities, people. Make your vote count.

On Friday we received the monthly jobs report. And the furore that arose with it. Principally the anger stemmed from right-leaning commentators who believed that the non-partisan Bureau of Labor Statistics, a government agency tasked with collecting data on employment among other metrics, “cooked the books”/ “massaged the figures”/ flat-out lied to show a significant drop in the unemployment rate that could not be attributed to people who had stopped looking for work—a cause of some earlier drops over the last few years. As someone who works with data originally collected from national statistics offices across the world on a daily basis, those claims touched a nerve. But I shall leave that rant for another time.

Instead let’s look at the New York Times piece that quickly followed on the outrage of fools. We can look at and analyse the data in different ways—the origin of the phrase lies, damned lies, and statistics—and surely the Republican and Democratic parties would do just that. They did. This New York Times piece shows how that can be—and was—done. It involves points of reference and context.

Then how the Democrats spin them:

Finally how the Republicans spin them:

But the facts themselves do not lie. 114,000 non-farm jobs were added to payrolls. The unemployment rate fell to 7.8%, the lowest rate since January 2009.

We are in the home stretch of the presidential campaign and the first of the four debates (three presidential, one vice-presidential) is tonight in Denver, Colorado. Unfortunately debates tend to be less about ideas and more about talking points, gotchas, and zingers. Regardless of the debates’ utility, candidates do not always convey everything they express through words. Sometimes they send a message through their body language. The New York Times looks at a few, what they call, signature gestures used by President Obama and Governor Romney.

The gestures are illustrated and then explained and shown in three examples from the respective candidate’s convention speech. The overall use of the gesture is then indicated in a bar showing how often and when in the speech the gestures were used.

People make a great deal about the Hispanic vote and how it will affect the election. In every election I can recall. Granted, that’s only  a few presidential elections and a couple more Congressional mid-terms. But the problem is that Hispanics do not vote. In scientific-ish terms, the Hispanic vote is wasted potential energy—they could make quite the impact, particularly in the south and southwest, arguably too in the larger cities. But to look at where to focus energies at higher efficiencies, i.e. turnout, the New York Times has this graphic looking at the potential for Hispanic votes.

This is the year of the percentages. From 99 to 47. Earlier this week, Mother Jones revealed via a secretly recorded dinner Mitt Romney as claiming that he doesn’t care about the 47% of people who do not pay income tax. He probably meant that he doesn’t care about getting their vote rather than caring for them as people, but regardless of his intention his statement did not sound good. This 47% are people who are dependent on government, or as Romney’s vice presidential candidate would say, they are “takers”. But is this true?

The great thing about news stories and infographics is that as time progresses, one has more opportunities to find data to back stories and arguments. The day of the breaking news, CNN published this simple pie donut chart. Crude, but given the breaking news it is effective.

It proves that Romney was correct, that 47% of people do not pay income taxes. But, it also proves that Romney was at best glossing over the details or at worst manipulating the people listening into thinking that 47% of people do not pay taxes. It may be only 0.9% of Americans who do not pay any taxes. Furthermore, retirees and young people often do not earn income with which to pay taxes. If retired senior citizens are “takers”, I suppose Romney does not want the elderly vote so often important to the Republican base.

But news stories evolve and more statistics become available. A few days later, the New York Times published a longer infographic piece, with below a cropping of the overall.

It expands upon the nature of the story and breaks down the actual tax burden of the American public. It is far more nuanced that Romney stated back in May (the original recording of the video). The poorest Americans do not pay federal income taxes, they have the Earned Income Tax Credit (EITC) that is designed to deal with poverty, especially amongst families with children. It is, very simply, what one would call a tax credit incentivising work. The poorest Americans, however, still must pay payroll taxes and then state and local taxes. In percentage terms, the poorest Americans pay more to their states and local governments than do the wealthiest Americans, who in turn have the greater burden at the federal level. It is worth noting that many government programmes, local schools for example, are often funded at the state and local level.

The problem with Mitt Romney’s argument on taxes is that he wants to cut taxes at the highest income brackets and cut the social safety net programmes for the lowest brackets. We already have evidence that such policies do not correlate with economic growth. They instead correlate to a worsening gap between the wealthy and the poor. Think the 1920s rather than the 1950s, 60s, and 70s.

Credit for the pieces go to Susie Poppick (CNN) and the New York Times.

Last Friday was the jobs report for the month of August. And it was not as high as economists had expected. The problem is that the initial report is often inaccurate despite the fact we make such a big deal about the report. So the Washington Post looked at the revisions that take place in the months afterwards. Yeah, the initial reports are not so accurate.

The first two sets of charts (not shown above) look at the initial versus the revised numbers. The third (the cropping above) looks at the difference between those figures. The result is that the first few years of President Obama’s presidency created more jobs than expected but that the last two months have seen worse-than-expected job creation. I would be curious to see how this correlates to the end of the stimulus plan, but I imagine it would be difficult to link that to the jobs reports.

Credit for the piece goes to Todd Lindeman.

This past weekend the Washington Post published an infographic looking at how the Democratic Party has demographically changed over time and compared those changes to those in the Republican Party. The piece is large, but shows some interesting trends particularly with the racial diversification of the political parties—or lack thereof. It is an important trend when considering the white population is growing at much slower pace than minority groups.

A rare mid-day posting. Some interesting figures published on Twitter by Public Policy Polling look at the ethnic breakdown of the—I presume self-identified—voters for both Governor Romney and President Obama. Perhaps we all already knew this, but one voter group is more diverse than the other.

To see whether these align with the national population, I included some quick stats published by the CIA World Factbook on the ethnic breakdown of the United States. The tricky part, however, is that the US Census Bureau does not regard Hispanic as a discrete ethnic group. Instead, it is considered an origin. Thus, you can be a black Hispanic of Caribbean descent or a white Hispanic from Spain. So, in full transparency, my United States figures for Hispanic are a bit suspect. 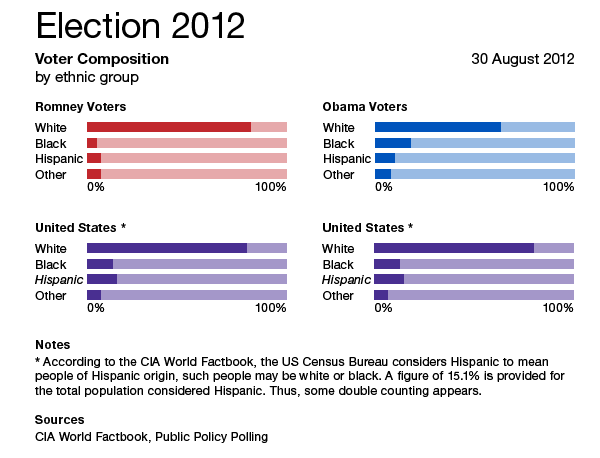 As I wrote about last weekend, one can look at the Olympics rankings in a number of different ways. Even without weighting medal counts, one has to decide whether to rank countries by gold medals (as the IOC does) or by total medals (my personal preference). The New York Times looks at both in an interesting ranking chart.

Credit for the piece goes to Matthew Bloch, Shan Carter, and Amanda Cox.