Problems with my access to the tubes of the internets prevented me from posting this piece last week. But it’s still good and still relevant, especially in the wake of last night’s presidential debate. The New York Times and the FiveThirtyEight forecast came together to create this interactive flow chart, if you will, of the ebb and flow of electoral politics.

Two different views, one based on electoral votes and the other on the margin of victory, determine the basic chart type. But both let you watch swings states vacillate between Republican and Democratic support. Context is provided to the side of the main graphic to explain just what was going on in particular elections.

Credit for the piece goes to Mike Bostock, Shan Carter, and Amanda Cox.

The Boston Red Sox hired John Farrell this weekend to be their manager just one season after hiring Bobby Valentine for the role. There is a lot to be said about just who is to blame about the Red Sox’ awful season. But it was pretty awful. How awful? The Boston Globe shows us in this interactive piece.

It’s a series of small multiples of line charts. However, one of the big problems with the infographic is that the labels are entirely absent. As best I can tell the line is the number of games over .500, i.e. an even split between wins and losses. But, it could be more clearly called out if not in the legend or on the axes than in the title.

But over all it does put this past season into a sober perspective.

Credit for the piece goes to Daigo Fujiwara.

This graphic comes from a set by the New York Times that looks at absentee and mail-in ballots, which are particularly popular in western states. The representation of the absentee ballot from Minnesota in 2008 is then examined to see which areas were the reasons for discounted ballots.

Follow the directions to the best of your abilities, people. Make your vote count.

On Friday we received the monthly jobs report. And the furore that arose with it. Principally the anger stemmed from right-leaning commentators who believed that the non-partisan Bureau of Labor Statistics, a government agency tasked with collecting data on employment among other metrics, “cooked the books”/ “massaged the figures”/ flat-out lied to show a significant drop in the unemployment rate that could not be attributed to people who had stopped looking for work—a cause of some earlier drops over the last few years. As someone who works with data originally collected from national statistics offices across the world on a daily basis, those claims touched a nerve. But I shall leave that rant for another time.

Instead let’s look at the New York Times piece that quickly followed on the outrage of fools. We can look at and analyse the data in different ways—the origin of the phrase lies, damned lies, and statistics—and surely the Republican and Democratic parties would do just that. They did. This New York Times piece shows how that can be—and was—done. It involves points of reference and context.

Then how the Democrats spin them:

Finally how the Republicans spin them:

But the facts themselves do not lie. 114,000 non-farm jobs were added to payrolls. The unemployment rate fell to 7.8%, the lowest rate since January 2009.

People make a great deal about the Hispanic vote and how it will affect the election. In every election I can recall. Granted, that’s only  a few presidential elections and a couple more Congressional mid-terms. But the problem is that Hispanics do not vote. In scientific-ish terms, the Hispanic vote is wasted potential energy—they could make quite the impact, particularly in the south and southwest, arguably too in the larger cities. But to look at where to focus energies at higher efficiencies, i.e. turnout, the New York Times has this graphic looking at the potential for Hispanic votes.

For your Friday comic relief comes the infographic of the week.

The content is serious. But the graphic is laughable at best. And undercuts the message in my opinion. Seriously, it’s like the mobile weapons labs, but worse. All over again.

This tree map from the Wall Street Journal looks at an interesting subject: average household spending. How much are we spending on housing, on food, on transportation, &c.?

But I’m not so sure that the main visualisation is necessary. I appreciate the big colour and splashiness, but the space use seems inefficient. Perhaps if the colours had been tied, as is commonly seen, to another variable, the tree map would be more useful. Imagine if the chart looked at the spending value and the average growth over the last ten years, with the year-by-year value still plotted below.

The New York Times published a chart looking at the decline in life expectancy for under-educated whites, i.e. whites who have not finished high school. The life expectancies of blacks and Hispanics offer a stark contrast, for while starting at a lower base, their respective expectancies are increasing.

Perhaps the greatest danger now facing NATO and US troops in Afghanistan is the age-old wolf in sheep’s clothing, the insurgent dressed in Afghan Army fatigues. As the graphic below shows, the number of fatalities has been increasing along with the number of attacks. The silver lining in the cloud (to mix metaphors) is that the average lethality of the attacks is on the decline as fewer ISAF soldiers are killed per attack. 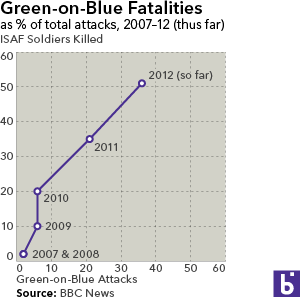 Hannah Fairfield at the New York Times created a great infographic a few years ago that looked at the history of the price of gasoline and how many miles, on average, an American drove in a car per year. The piece told some rather interesting stories starting in the 1950s with the explosion of the suburb, interstate highways, and car ownership. The energy crises of the late 1970s and early 1980s provided a spike that eventually subsided for the 1990s and early 2000s when the United States was the dominant economic power and the only country that really consumed that much gasoline. (I remember those days well for that was when I first started filling my own car’s gas tank. How great $1.xx/gal gas was.)

Earlier this week she returned in a similar fashion to look at driver safety over time. The metrics were average annual miles driven and the number of auto fatalities per 100,000 people. Segments of time characterised by a common theme, story, or technology are highlighted and the annotated to explain the change from the previous time period. It’s a rich story that walks the reader through the history of the American auto experience since World War II.

Credit for the piece goes to Hannah Fairfield.