Lately we have seen a few incidents of violence amid the large mass of peaceful protests in Kenosha, Wisconsin and other places across the United States. With death on both sides of the protest line, the situation risks devolving into chaos. Though the governor of Wisconsin has sent in National Guard troops (with some additional units later dispatched by the President) to tamp down on the violence, the threat of chaos remains. And sadly the President admitted during a television interview last night that his trip later today to Kenosha is meant to drive up the enthusiasm for one side of those protest line.

Another element that the President also adds when discussing this law and order theme is the threat to the rank and file law enforcement officers in the line of duty. And there have been incidents of violence. As Vice President noted in his acceptance speech at the Republican Convention last week, a federal law enforcement officer died in Oakland, California at the hands of a protestor. Interestingly, while Pence implied that the protestor was from the left, that particular alleged murderer was actually from a right-wing anti-government group. But the point here is to acknowledge that law enforcement officers in the line of duty to face certain threats.

However, is the threat of dying from a protest turned violent the most dangerous threat?

Data from the Officer Down Memorial Page, which tracks the deaths in the line of duty for officers across the United States, shows that there is one threat that has killed more than 3-times as many LEOs as has gunfire. What is it? What else could it be? Covid-19.

So remember as the President speaks in Kenosha today about the dangers posed to law enforcement that yes, there have been a few incidents of violence directed at law enforcement in protests turned violent. But that the violence has not all been from the left, but also from the right.

Yesterday, I left the office late and encountered a protest in front of my building organised by the Black Lives Matter movement. The protest focused on recent shooting deaths of black men by police officers in Minneapolis and Baton Rouge, but the protests clearly tapped into deeper issues regarding race, inequality, and armed police among others. But in a far more tangible sense, I am left curious what has happened to the police officers involved in these cases? I figured today would be a good day to share the New York Times work on the follow-ups. The piece looks for accountability or the lack thereof in police shootings of civilians. Additional tables look at settlements and Justice Department investigations. 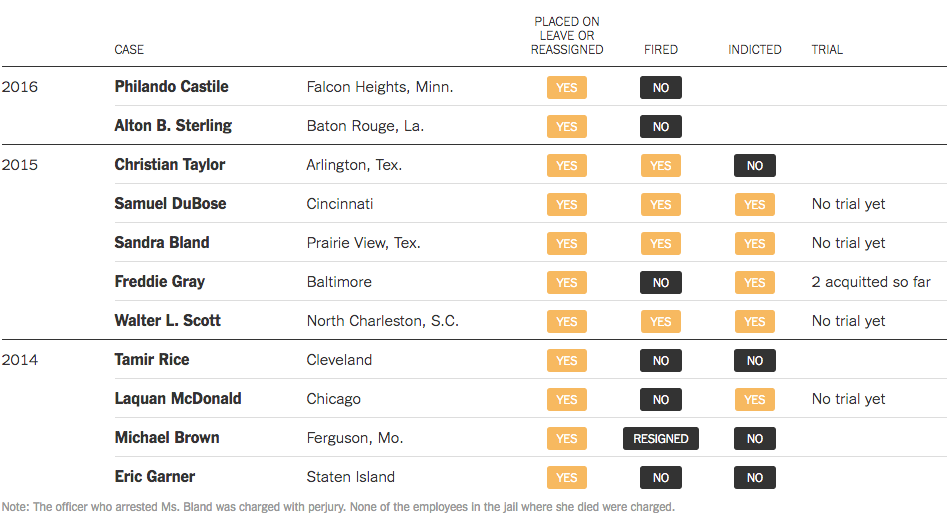 What has happened afterwards

The piece does a nice job of using tables to organise and showcase the results of the investigations. Something about the colour choices feels off; I am far more quickly drawn to the negative results as opposed to the positives. Should that be the idea? Regardless, the work shows that tables, while not the sexiest visualisation form available, have an important role to play in designing displays of information.

Credit for the piece goes to Haeyoun Park and Jasmine C. Lee.