Earlier this year, the earthquake and tsunami that damaged Japan also brought about failures in a nuclear plant at Fukushima. As we near the end of the year, the New York Times reports on how it might take many years for those who had to—or chose to—move away to return to a safe Fukushima.

Technology changes and changes rapidly. The United States led the way with cabled phone networks. Now, countries in Africa are skipping landlines and moving straight to mobile phones. The New York Times has an piece on the changes in technology and accompanies that piece with small multiples of choropleth maps that showcase different technologies and their prevalence.

What is interesting about these maps is that the Times eschewed the conventional Mercator or Robinson map projections and went with a slightly more unusual layout. But, a layout that saves some space by its contortion of the world’s oceans. Was their reason spatial or something more about maintaining consistent area? I would be curious to see the piece in print to see if it needed to fit a narrow column.

All in all, an interesting set of maps.

The New York Times had a piece in the Sunday paper asking whether American police have gone military, especially in the wake of the images of the police response to Occupy Oakland and Occupy Wall Street with police/troops deployed in tactical body armour, armoured vehicles, &c. The Times piece was accompanied by an Op-Art piece that took three key protests and illustrated the type of police officer responding to the unrest.

Credit for the illustration goes to Chi Birmingham. The title of this post comes from a British publication about the Brixton riot of 1981 where an individual was asked about why he was rioting was quoted as saying “We want to riot, not to work.”

I do not often get the chance to post illustrative works. But, the Washington Post reported on the work of Georgetown students that shows how China has tunneled thousands of miles of, well, tunnels to create a secret labyrinth for their nuclear weapons programme. The result is that instead of the few dozen warheads that China is thought to have, they could have many more times that. They included this graphic, cropping below, with the article.

In just a few days, NASA’s next Martian rover, Curiosity, will lift off for a 2012 date with the Martian surface. The Washington Post has a two-part motion graphic piece to look at the rover’s landing and scientific components.

Credit for the piece goes to Alberto Cuadra, Sohail Al-Jamea, and Andrew Pergram.

Ever been on a flight where there is not enough overhead luggage capacity for everyone? Then they make you stow your bag anyway? Well, apparently that’s what’s happening in these days of baggage fees—which make airlines quite profitable.

This diagram in the New York Times shows how American Airlines is changing from the more common front-to-back seating of passengers to a random assignment of seats in an attempt to reduce the time spent boarding the plane. After all, not only are baggage fees money, but so is time.

We have seven billion living on the planet today. Or at least we think we do. Really, who knows? But for the sake of this blog post and many others like it along with news stories and water cooler conversations, let’s just say we’re at seven billion, okay?

So where do you fit into the giant seven billion-ness of the world?

The BBC can tell you.

You enter a few data points such as your birthday and the country in which you live, and you get a customised you-are-a-unique-snowflake report on how special you are.

The graphs are not particularly fancy, but they work. More interesting of the whole set is the world population where you are placed in the context of the global population.

Less interesting are the maps, which serve only to show you where in the world your country is located and then those of the greatest and least population growth or life expectancy. The secondary cases could be useful if the countries were small and relatively unknown. But in terms of life expectancy the highest growth is Japan most people know where Japan is located. The other countries noted, Qatar, Moldova, and the Central African Republic are probably less well-known by some, but could the data be better represented? Probably.

Antarctica is a continent way down at the southern end of the world. It is covered almost entirely by glaciers. But glaciers move, and NASA and the University of California unveiled a map looking at the speed of the glaciers’ movements. Along with it, an interesting little video showing the tributaries to the glacial flow.

Living in Chicago, hurricane season means rather little. Perhaps at worst the city would see a major rain system moving up from Texas or the Gulf Coast. But, from all my time living on the East Coast makes hurricane season a bit more meaningful if now just as an outside observer. The Weather Channel has launched a site called the Hurricane Tracker that allows you to follow the current season’s storms.

While there has yet to be any major activity, there have been a few named tropical systems that are present in what is called the Active Tracker. The storms are tracked geographically, showing you the precise locations where the storm was recorded and then filling out the path between points. The data includes information on strength—hurricanes are classed on a 1–5 scale with 5 being really most unpleasant—such as windspeed and pressure—hurricanes are enormous low pressure systems. The panel on the left of the screen provides a detailed history of the storm and links the recorded data points to the corresponding geographic points on the map. Currently, the storms have all been relatively minor and short-lived; watching a major storm of some duration through the charts and the map progression could be quite fascinating.

But there is also the Historical Tracker that catalogues an impressive number of previous storms. The view first loads with an overwhelming number of storm tracks, but filters for controlling the years—which includes a interactive mini-graphic of the total number of storms for each year that when clicked filters for only that year—and for location of landfall begin to significantly bring your search or exploration into focus. I have yet to find any detailed information about specific storms, the one in this screenshot being those that made landfall in the Northeast roughly during my lifespan. (I have memories of being at the shore during Hurricane Bob with the winds and rain and warning sirens making an impression.) You cannot click to focus on a particular storm, instead, a mouseover is the only way of discovering the name of a particular track. But, that may simply be an unavailable level of data, especially with the storms from the 19th and early 20th centuries.

Now I just hope we can use this sort of information to help develop better forecasting and modelling to help save lives and property.

Credit for the design goes to Stamen Design.

As most of us know, the final space shuttle mission lifted off on Friday. Appropriately, the New York Times created an infographic for the news stories accompanying the mission that details the history of the entire shuttle program’s flights. If you are a space-y kind of guy like me, it’s worth a look. 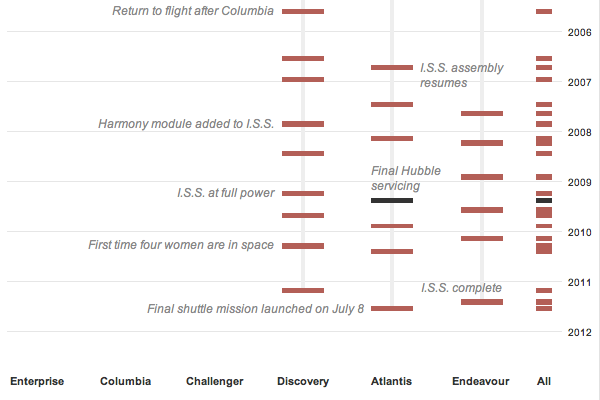