A few weeks ago here in the United States, we had the mass shootings in El Paso, Texas and Dayton, Ohio. The Washington Post put together a piece looking at how mass shootings have changed since 1966. And unfortunately one of the key takeaways is that since 1999 they are far too common.

The biggest graphic from the article is its timeline.

It captures the total number of people killed per event. But, it also breaks down the shootings by admittedly arbitrary time periods. Here it looks at three distinct ones. The first begins at the beginning of the dataset: 1966. The second begins with Columbine High School in 1999, when two high school teenagers killed 13 fellow students. Then the third begins with the killing of 9 worshippers in a African Episcopal Methodist church in Charlestown, South Carolina.

Within each time period, the peaks become more extreme, and they occur more frequently. The beige boxes do a good job of calling out just how frequently they occur. And then the annotations call out the unfortunate historic events where record numbers of people were killed.

The above is a screenshot of a digital presentation. However, I hope the print piece did a full-page printing of the timeline and showed the entire timeline in sequence. Here, the timeline is chopped up into two separate lines. I like how the thin grey rule breaks the second from the third segment. But the reader loses the vertical comparison of the bars in the first segment to those in the second and third.

Later on in the graphic, the article uses a dot plot to examine the age of the mass shooters. There it could have perhaps used smaller dots that did not feature as much overlap. Or a histogram could have been useful as infrequently used type of chart.

Lastly it uses small multiples of line charts to show the change in frequency of particular types of locations.

Overall it’s a solid piece. But the timeline is its jewel. Unfortunately, I will end up talking about similar graphics about mass shootings far too soon in the future.

Today’s piece is nothing more than a line chart. But in the aftermath of this past weekend’s gun violence—and the inability of this country to enact gun control legislation to try and reduce instances like them—the Economist published a piece looking at public polling on gun control legislation. Perhaps surprisingly, the data shows people are broadly in favour of more restrictive gun laws, including the outlawing of military-style, semi-automatic weapons.

In this graphic, we have a line chart. However the import parts to note are the dots, which is when the survey was conducted. The lines, in this sense, can be seen as a bit misleading. For example, consider that from late 2013 through late 2015 the AP–NORC Centre conducted no surveys. It is entirely possible that support for stricter laws fell, or spiked, but then fell back to the near 60% register it held in 2015.

On the other hand, given the gaps in the dataset, lines would be useful to guide the reader across the graphic. So I can see the need for some visual aid.

Regardless, support for stricter gun laws is higher than your author believed it to be.

Indeed, a chart about deaths from firearms from the Economist. From a graphical standpoint, we all know how much I loathe stacked bar charts and this shows why. It is difficult for the user to isolate and compare the profiles of certain types of firearm violence against each other. Clearly there are countries where suicide by gun is more prevalent than murder, but most on this list are more murder happy.

And then the line chart that is cleverly spaced within the overall graphic, well, it falls apart. There are too many lines highlighted. Instead, I would have separated these out into a separate chart, made larger, so that the reader can more easily discern which series belongs to which country. Or I would have gone with a set of small multiples isolating those nine countries.

I am also unclear on why certain countries were highlighted in the line chart. Did they all need to be highlighted? Why, for example, is Trinidad & Tobago. It is not mentioned in the article, nor is it in the stacked bar chart.

But the biggest problem I have is with the data itself. But, every one of the countries on that list is among the developing countries or the least developed countries. Except one. And that, of course, is the United States.

A few months ago I covered an editorial piece from the New York Times that looked at all the action, by which I mean inaction, the federal government had taken on gun violence in the wake of some horrific shootings. Well on Saturday the Washington Post published an article looking at how there has been action on the state level.

It used a series of small multiple maps of the United States with states represented as tiles or boxes. States are coloured by whether they took action in one of six different categories. It is a pretty simple and straightforward design that works well.

The only thing I am unsure about is whether the colours are necessary. A single colour could be used effectively given that each map has a clear title directly above it. Now, if the dataset were to be used in another chart or graphic alongside the maps where the types of action were combined, then colours could be justified. For example, if there was a way to see what actions a state had taken, i.e. pivot the data display, the different colours could show what from the set the state had done.

And in Pennsylvania’s case, sadly, that is nothing.

Credit for the piece goes to Amber Phillips.

Back in March I posted about a great graphic from the New York Times editorial board they made in the wake of the Parkland, Florida school shooting. Saturday morning, the day after Friday’s Santa Fe, Texas school shooting, I was reading the paper and found the updated graphic.

Yeah, almost nothing has changed. Congress passed and the president signed an omnibus spending bill that included language to improve reporting on background checks.

Now from a design standpoint, what’s nice about this graphic is its restrained use of colour. The whole piece works in black and white. Of course it helps that there is nothing to show that needs to be highlighted in the data.

For many years I would often tell people that sometimes a visualisation can be “boring”, because the data itself is boring—a lack of growth in a market, no real mergers, or even steady and consistent but unspectacular growth. Those can all be stories, even if they likely result in very monotone choropleths or straight line charts or perfect steps of bar charts.

And then there are times when the lack of growth or change, when visualised, can be very powerful. I wanted to share this piece from the New York Times with everyone because it does just that.

You really need to click through and see the scale and scope, because the designers behind this did a fantastic job of capturing that sense of lack of change in a very large and expansive piece.

Credit for the piece goes to the New York Times Editorial Board.

Today’s post was going to be something not this. But it is remarkable how many people die in the United States in mass shootings. It is, generally speaking, not a problem experienced in the rest of the developed world. The question is do we want gun violence to really define American exceptionalism?

Anyways, the Washington Post has a frightening piece exploring all the deaths, the guns, the killers, and the frequency of the killings.

Credit for the piece goes to Bonnie Berkowitz, Denise Lu, and Chris Alcantara.

Well, the data speaks for itself. I wanted to use this screenshot, however, to show you the story because I think it does a fantastic job. Without having to read the article, the image encapsulates what is to come in the article.

That said, there are a few other scatter plots worth checking out if the topic is of interest. And the explanation of the data makes all the more sense.

But I really loved the impact of that homepage.

Credit for the piece goes to Max Fisher and Josh Keller. 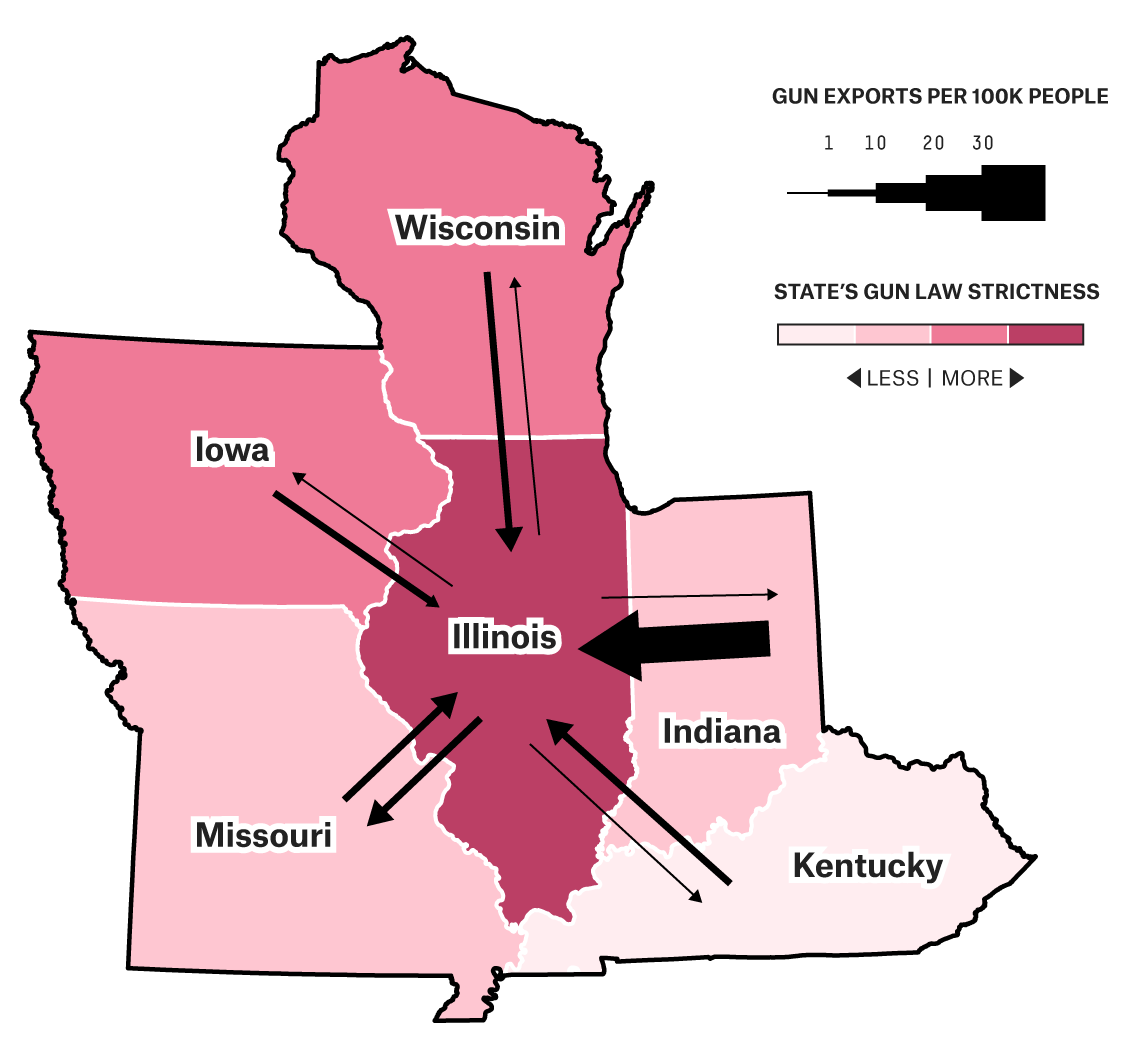 Well news definitely happened whilst your author was on holiday. So today we look at an informative piece from the New York Times that compares the weapons fire from the Las Vegas shooting to that of Orlando and a fully automatic weapon.

This piece makes good use of both audio and motion graphics to show how the bump stock makes a semi-automatic rifle more like what we might call a machine gun. It also includes some nice illustrations that demonstrate how the stock does what it does.

From an audio standpoint, I do want to point out that the designers made a wise decision in opting not to use authentic sounds. Instead they chose an abstracted sound, allowing the user to focus on the rapidity and steadiness of the sound.